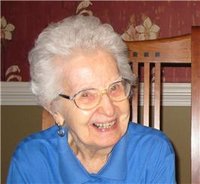 (Anna) Jean Drager Reynolds (1920-2010) On July 3, 2010. Jean passed away peacefully in her sleep at the Kensington Park Assisted Living Residence in Kensington, MD. She had Alzheimer's disease and breast cancer. She was born Anna Jean Drager on September 21, 1920 in Johnstown, PA, the fourth of six children of Leopold Baldwin Drager and Florence Womer Drager. Jean graduated from Westmont Upper Yoder High School in 1939, and from the Cambria-Rowe Business College in 1940. She had a long and successful career as a secretary at the U.S.-National Radiator Corporation in Johnstown, before retiring upon her marriage to Gilmer Lyne Reynolds in 1959. Their daughter, Patricia Ann Reynolds was born in 1961. The family moved to the Chicago area in 1965 and then near Youngstown, Ohio in 1971. After Gilmer's death from lung cancer in 1984, she joined the Board of the Women's Committee for Children's Concerts, which organizes concerts with the Youngstown Symphony Orchestra for children in all of the local schools. She held many positions over her 18 years of involvement, including Treasurer of the main Committee and President of the "Tiny-Tots" Committee. In 2003, Jean moved to Maryland to be closer to her daughter. Jean was an athlete in her youth, playing basketball in high school and winning many awards in roller dance after graduation. She was an avid bridge player, a talented seamstress, and skilled at knitting, needlepoint and cross stitch. She was warm and generous, and a devoted wife, mother, grandmother, sister, and friend to many. She will be greatly missed. In addition to Patricia, she leaves her son-in-law, Daniel Vincent, and grandchildren, Emily Reynolds Vincent and James Reynolds Vincent, all of Chevy Chase, MD; her sister, Florence (Betty) Burkhart; and many nieces, nephews, and friends. A private graveside service will be held at Grandview Cemetery in Johnstown, PA on July 7, 2010. In lieu of flowers, memorial donations may be made to the Montgomery Hospice in Rockville, Maryland; the Alzheimer's Association; or the American Cancer Society.