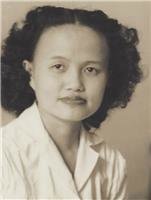 Born in Washington, D.C. December 18, 1917, Cynthia was the oldest of six daughters of Isabel Xiangci Chan and Samuel Yingrong Chan. Being a Chinese government diplomat, her father spent most of his time away from home. Cynthia and her siblings spent much of their formative years in Beijing with their mother in a world very reminiscent of an Asian version of F Scott Fitzgerald's The Great Gatsby. All this changed with the outbreak of WWII and the Japanese invasion of China. Cynthia served as a nurse in the Flying Tigers Volunteer Force under the command of Gen. Claire Lee Chennault. There she met her future husband Dr. Richard Y. H. Lee. Irony would have it that they were both living in Washington DC and had to meet in China. Furthermore, her sister Anna eventually married Gen. Chennault. Such a devastating and tragic war brought these four together. With the fall of China to the communists in 1949, Cynthia and Richard moved to Taiwan thinking that soon they would be returning to the mainland, but they stayed on the island for over 50 years. In 1956, their son Claire Lee was born; named after Gen Chennault. In Taipei, Cynthia continued to work closely with her husband in the medical field; they started the Aviation Medical Centre, which performed many of the country's medical immigration examinations to the USA and other major countries. She became deeply involved in numerous charitable organisations, most notably TIWC (Taipei International Women's Club), which was founded in 1951. Her work touched the hearts of so many people around her. Most importantly, Cynthia continued to always be there for her five sisters, caring for them and for their children whenever necessary. She was the "little mother" and the "big sister," always putting others' needs in front of her own. In the late 1990s, Cynthia and Richard moved back to Washington, D.C., where sister Anna had become a prominent figure in the capital's political arena. The two eldest Chan sisters could again spend a lot of time together. All the sisters would get together at least once a year in the US or in Asia. Richard passed away in 2008. Cynthia passed away peacefully in her sleep on October 31, 2018 in Rockville, Maryland. In addition to her son Claire, daughter-in-law Jeamin, granddaughters Christie, Michelle and Jessica, Cynthia leaves behind sisters Sylvia Wong and Loretta Fung; step-daugther Carole Yee; nephews Cecil Fong, Herman Fong, Larry Wong, Christopher Wong and Larry Fung; nieces Roberta Wong, Arlene Fung, Ramona Fung and Ida Fung. Cynthia was predeceased by sisters Anna Chennault, Constance Fong and Theresa Kwan. A visitation will be held on Saturday, November 10, 2018 from 11am - 1pm at Advent Funeral and Cremation, 9013 Annapolis Road in Lanham, Maryland. A private burial will follow.