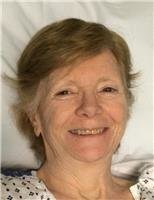 Therese "Terry" (McManus) Kanach (71) passed away peacefully on February 28, from complications after a brief bout with cancer. Terry was born in Brooklyn and grew up in Greenwood Lake, NY, where she ice skated from shore to shore every winter and helped at her uncle's diner. She attended John S. Burke Catholic HS in nearby Goshen, NY, and graduated in 1969 from Mount Saint Vincent College in the Riverdale section of The Bronx. It was during her college years that she met the love of her life, Denis Kanach, who has been her sweetheart for the past 52 years. Terry and Denis soon made the Washington, DC area their home for the next three decades, and then spent 15 happy years at a home in the woods, on a large pond in Montpelier, VA, before returning to the DC area in 2017. Terry began her career teaching 5th grade and high school. After taking time off to raise her four sons, she took what she called a "vacation," leaving the home front to work for the Georgetown University President's Office and then the Federal Financial Institutions Examinations Council. A lifelong learner, she earned a Master of Arts degree in English at Georgetown in 1990. Terry loved long-term, low-maintenance friendships, reading fiction, hosting big family meals, sharing stories of her life in small town and big city, and supporting her four sons and eight grandchildren in all of their various pursuits. She was humble except when it came to her pride in her family and her quiet pleasure in displaying in her living room a large painting she made of a vase and flowers. Terry is survived by her best friend and husband Denis. She cherished her individual friendships with her four sons: Francis (Leah), Jesse (Sara), Daniel (Kate), and Michael (Kristen). She loved the antics of the brothers during dinner, and despite her patience amidst the loving chaos, she was famous for drawing a line at, "No singing at the dinner table," which was always met with laughter. Her love for her boys was boundless, and she felt blessed to have had great relationships with each of her daughters-in-law. She so enjoyed her eight grandchildren, Camille, Duncan, Darcy, Josephine, Zyggy, Rowan, Marie, and Cal. She is also survived by her dear older brother James H. McManus of Richmond. She was predeceased by her father John J. McManus (an FBI agent under J. Edgar Hoover, Greenwood Lake Town Justice, and volunteer for developmentally disabled persons, who was honored for his service with the naming of the John J. McManus AHRC Building in Middletown, NY), her mother Margaret (Lawton), and siblings John, Mary, and Peter. The family welcomes any and all to join them in a celebration of Terry's life at River Road Unitarian Universalist Congregation on Saturday, March 16, in the Sanctuary, with open doors at 11:30 a.m. and a program beginning at 12:00 noon followed by lunch. The address is 6301 River Rd., Bethesda, MD 20817. From 495, take the exit for River Rd. East. RSVP's and condolences can be sent to Denis's Facebook page or your other family contact. In lieu of flowers, please send donations to Iona Senior Services (https://www.iona.org/ways-to-give/) or the Alzheimer's Association (https://alz.org/help-support).