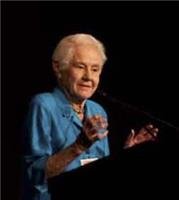 Virginia "Ginny" Guild Watkin died of natural causes on April 14, 2019 at age 93. Born in Clinton, Massachusetts in 1925, she married Donald Morgan Watkin (1922-2007) in 1946 and raised four children: Henry Maxwell Watkin, Mel (Mary Ellen) Watkin, Ted (Edward) George Watkin and Ann Kymry Watkin- Statham. Over her forty year career as a lawyer she tried many cases including cases at the Supreme Court. Ms. Watkin was a 1946 graduate and very active alumna at Wellesley College in Massachusetts. She went on to gain her law degree at New York City's Columbia University in 1949––one of only three women in her class to graduate. Since law firms refused to hire women at that time Ms. Watkin worked for two years as a research assistant to Columbia Law Professor Richard Powell. In 1952 she was hired as an associate at the law firm of Covington &amp; Burling and stayed on through 1958 until the birth of her 4th child. In 1960-61 she took a break from law when her husband was named Nutrition Advisor to the World Health Organization in Mexico City. They moved the family to Guatemala and Mexico, a formative experience for everyone. On returning to the United States the family moved to the Boston area and Ms. Watkin returned to the law taking on a range of tax cases and work for the Massachusetts Crime Commission. Awarded a 1963-65 fellowship at the Bunting Institute of Radcliffe College (now the Radcliffe Institute for Advanced Study) she completed a book entitled Taxes and Tax Harmonization in Central America. After that period she specialized in litigation and corporate law. In 1973 she became the first woman partner at the Boston firm of Herrick, Smith, Donald, Farley &amp; Ketchum and in 1974 moved to Washington to become the first woman partner at Covington &amp; Burling. At Covington she used her fluency in Spanish and Latin culture to work on infrastructure issues with the government of Puerto Rico, among many other cases. She retired from Covington on September 30, 1994. Throughout her life Ms. Watkin worked in support of young women and her younger colleagues in law. She served on the boards of many organizations and educational institutions including committees and boards at Wellesley College and the Wellesley Centers for Women, Girls Inc., Northfield Mount Hermon School, and Norwich University. She served as the President of the Executive Council for the Society of Woman Geographers 1993-1996 (elected to SWG in 1978) and after being elected to the Cosmos Club in 1989 she held a number of board and committee positions beginning in 2000 including the office of president of the Cosmos Club for 2003. Always an adventurous traveler she and her husband traveled extensively. They circumnavigated the globe above the Arctic Circle on an icebreaker and traveled to Antarctica a number of times, each time embarking from a different location: Patagonia, South Africa and Australia. Her last major adventure was to the Galapagos in 2009 where she hiked with ski poles throughout the islands. Her four children and their spouses, five grandchildren, 12 great-grandchildren, and 11 great-great-grandchildren survive her. It is some solace to the family that in her last moments she cheered on her fellow Columbia Law graduate, Ruth Bader Ginsburg, on DVD with close family members. A memorial celebration is planned for later in the year. In lieu of flowers donations are requested in memoriam to Maryland Public Television (MPT.org/donate or 800-223-3678) or WETA (WETA.org/donate or 703-998- 2724). Photo: Virginia "Ginny" Guild Watkin, Wellesley Centers for Women 25th Anniversary, 2010, photographer unknown