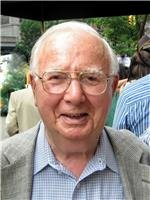 On the morning of December 16, 1944, David Perlman was in his foxhole on the front lines in Belgium. He and his foxhole buddy were members of the first platoon of C Company, 394th infantry regiment, 99th Infantry Division and they had only recently taken their position. Suddenly, at 5:30 in the morning, the ground shook and the sky lit up -- the Battle of the Bulge had begun. When the barrage ended two hours later, he and his buddy crawled out of their foxhole and discovered a huge unexploded shell less than two feet away. That terrible morning was, Dave later would say, "the luckiest day of my life". That long, happy and fruitful life ended on July 7, 2019, three weeks shy of his 95th birthday. Dave always considered himself a fortunate man. He was happily married to the former Laura Lee Butler for nearly 50 years, until her death in 2001, and they delighted in their two children, Linda and Arthur. Dave combined his passions for newspaper reporting and Labor Unions while writing for labor publications, including five years as editor and head of public relations for the American Federation of Government Employees and over thirty years at the AFL-CIO News where he served as Associate Editor. In the early '60s, however, he applied for a job at the USIA and the resulting FBI investigation formed the basis of a "curious biography" that he later published in the Washington Post. The article consisted mostly of quotes from the report which managed to uncover his love of riding fire trucks as a reporter in Jennings Louisiana and quoted a neighbor [name deleted] who accused him of being "a vociferous even belligerent exponent of labor unions..." It was a charge that Dave happily pled guilty to. David Perlman grew up in New York City where he graduated from Boys High School and, after the war, City College but his most important education occurred during his summer days on his Aunt Mary's Farm in Massachusetts. Mary Ruben was a second mother to him and her commitment to social and economic equality had a deep affect on her nephew who gloried in the fireside discussions of Civil Rights and Labor Unions and tales of the International Brigade fighting in the Spanish Civil War. Those fires lit his way for the rest of his life. Dave retired from the AFL-CIO News in 1989 and spent his retirement volunteering at a local high school, traveling the world over and giving no doubt welcome advice to his two grandsons, Jason and Jeremy. In his final 13 years, he lived at Riderwood Retirement Community in Silver Spring where he took classes, played poker, penned letters to the editor and contributed occasional pieces to the Riderwood paper. On Memorial Days, he marched with surviving members of the 99th Infantry Division. As he wrote before their final march in 2013, "...we enjoyed good years, many of them. Those we remember this day never had that chance. And, finally, we may disagree among ourselves about politics or public policy. But, even in a heated argument, we would never challenge the other person's patriotism. That's part of our shared heritage".