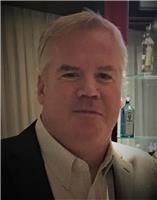 Brian Scott, a charming, quick-witted native Scrantonian who brightened every room he entered, was an accomplished restaurant manager and director of operations, and who was utterly adored by his family, died at age 51 on Feb. 3, 2020. Born in Scranton, PA on May 24, 1968, Brian was a cute, red-headed kid who palled around with a scruffy dog named Tuffy and, after his older brothers went off to college, was the adored latchkey kid of his parents, Dick and Joan. Like his brothers, he played midget football in East Scranton and later suited up in high school for the Scranton Central Golden Eagles. He worked weekends and evenings at Scott TV, winging it when customers came into the store, befriending them when delivering sets to their homes and helping his father video tape weddings and graduations. Brian's magnetism was recognized by his classmates at Central, and they made him president of the Class of 1986. Brian went on to study at Cornell University, where he played defensive end and met his future wife, Deb Goldberg. He graduated with a degree in hospitality management. That led to a 30-year career in restaurants and restaurant groups in Telluride, San Francisco, Philadelphia, London and Washington, D.C. He mastered everything from line cook, to house manager to director of operations, and spoiled relatives and friends with delicious meals and with healthy snacks like home-made granola. Appraising new foods and dishes while traveling was a delight for Brian, and he journeyed abroad with loved ones to places like Italy, Iceland and Turkey. He and his partner of the last three and half years, Mari Snyder, celebrated their 50th birthdays in 2018 in Vietnam, Paris and Ireland, and their recent travels included a Navy Seal boating expedition with his sons, Max and Ned, in Virginia Beach. Brian was an intelligent, patient, judicious and loving father, and he encouraged his sons' talents in music, languages and sports. He cherished attending the boys' recital concerts and soccer and swimming events. The three of them were snuggle buddies over cooking shows and blockbuster movies and cheered on their football teams in Arsenal, the Philadelphia Eagles and Penn State. Brian kept on top of global events and U.S. politics, and while he held strong beliefs, he was open minded. He was a constant font of information about food and ingredients, and we will never eat salad without thinking of his advice to always add salt and pepper. He loved to ride for miles around Washington on a road bike, almost as much as he liked traveling around to Grateful Dead concerts in his younger days. Brian was the funniest person we knew, quick with an astutely amusing observation, never bitter or mean, or a line from a classic comedy like, "I got two words for you: Shut the hell up." When Dick had a mild stroke in 2014, his brother Patrick texted Brian in alarm and surprise. "I think the underlying issue here is that Dick is old," Brian replied. "And he has never eaten a fresh vegetable or a fruit that wasn't in a pastry." He died of complications from a long-term illness. He is survived by his two sons, Maxwell Asher Scott and Edward "Ned" Ross Scott of Washington, D.C.; brothers, Richard, Jr and his wife Amy of Portland, PA, Michael J. and his wife Kim of Fernandina Beach, FL, Patrick R. and his wife Susan of Ho Chi Minh City, Vietnam; father, Richard Sr. of Scranton, and former wife, Deb Goldberg of Washington, D.C. His partner, Mari Snyder of Washington D.C., was at his side when he died at Suburban Hospital in Bethesda, Md. He was an adoring uncle to 10 nieces and nephews who will miss him greatly. A funeral mass will be Monday at 11:30 a.m. at Saint Camillus Catholic Church, 1600 St Camillus Drive, Silver Spring, MD.