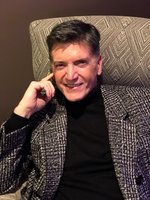 James Edward Bolger, 65, died at home on July 16, 2020. He had been struggling with cancer
for a year-and-a-half and was in hospice care when he passed.

Born in Hempstead, New York in 1955 to Donald A. and Mary Bolger, James spent his earliest
years living in various locations, including Germany, as his father was on active duty with the
U.S. Air Force. During James’ high school years, the family lived in Camp Springs, Maryland
and he graduated from Bishop McNamara High School.

James played the flute from a young age. He studied music at the New England Conservatory
and at the University of Maryland. Professionally, he pursued a career as a chef and primarily
worked in private homes. In the early 2000s, James became visually impaired and was no
longer able to work in the food industry. He briefly returned to school to study baroque flute at
the Peabody Conservatory. Later, he returned to the University of Maryland to study Spanish.

In January 2011, James met his husband, Luke Jensen, in Washington, DC. Both had survived
previous partners. They married in 2017. They shared a love of music and enjoyed ocean and
river cruising, especially in the Baltics, the Danube, South America, and the Caribbean.
In addition to his husband, James is survived by his brother, Donald, and niece, Stevie
McKulsky. Cremation has occurred and his ashes will be scattered at a later date.