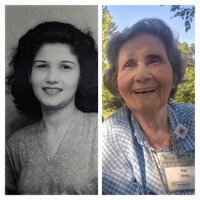 Patience went by the name Pat and was known affectionately to the family as Podgie. Her parents split up when she was three years old and from age five to fifteen she lived at the St. Paul’s School on Serpentine Lane in Calcutta, a charity school. Her education was cut short by the events of World War II and the bombing of Calcutta, during which St. Paul’s School was evacuated to the countryside.

At the age of fifteen she left St. Paul’s to enter secretarial school and soon after graduating was hired to work at the United States’ Hastings Army Air Base housed in the old Hastings Jute Mill on the Hoogly River in Calcutta, the headquarters of the U.S.’s India-China Division. Among her jobs was handing flight orders to the young pilots flying “Over the Hump,” across the Himalayas into Japanese occupied China, one of the most dangerous of missions of the fledgling Army Air Force in World War II.

In 1950 she emigrated from India along with most of her family, boarding a Peninsula and Oriental ship, the Mooltan, destined for England. Lined up along the rail watching her board in Bombay (now Mumbai) was a young Australian physicist, Mark Stephens Whitty, who was emigrating to London for the tech boom underway there after the war. On November 29 1952 Pat and Mark were married in London. Their first child, Timothy Mark was born in 1954 in Taplow, near London, after which they emigrated to Montréal, Canada, and from there to Bogotá, Colombia, where their daughter Julia was born, and from there to the United States, where son John Stephens was born in Scotch Plains, New Jersey. For most of their children’s schooling the family lived in Westwood, Massachusetts, where Pat built a phenomenal garden out of the endlessly rocky soil.

In 1975 Pat, Mark, and John immigrated back to Montréal, where they resided for two years before returning to the United States to live in Nashville, Tennessee. In 1979 they moved to Washington DC and for the last seventeen and a half years of her life, during her widowhood, Pat lived at Riderwood Senior Living Community in Silver Spring Maryland, a home she greatly enjoyed and where she painted watercolors and learned to play the piano at age 79.

Despite the travails of her childhood, she often said of her life that she had “fallen into a pot of jam.” She is remembered with love and deeply missed by her children, Tim, Julia, and John, by grandchildren Amy, Emma, Scott, and Helen Whitty, by numerous nieces and nephews, and by her cousin-in-law in Tasmania, Australia, Dorothy (“Doff”) Banks.

In lieu of flowers, donations may be made in Patience’s name to the ACLU, Public Citizen, or the charity of your choice.