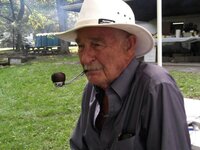 He formally resided in Harrisonburg, Va. He was born August 2, 1929, in Edenville, Michigan. He is preceded by wife, Deanna of 28 years, brother Bill, daughter Cathy, son Russell, son Richard, and son Ray. He is survived by sister Aletha Waite of Az., daughter Karen Bryant of Co., son Mike of Ma., son Bill of Tx., and  stepdaughter Tanya Beaghan and husband Robert of Pa. He had 15 Grandchildren and 20 Great-grandchildren.

Floyd finished first in his class at the Arthur Hill Trade School as an Engineer Draftsman in 1946.  He then joined the Army in 1948.  He was promoted to Master/Sgt. before his 21st birthday and held the honor of being the only Master/Sgt. Surveyor in the Army for 17 years.

During his Army career, Floyd was stationed in France, Panama, and Ethiopia. He was a world traveler ever since, visiting a total of 35 countries and 61 islands. He made a point to take his children and his grandchildren on travel adventures before his passing.

He was a Deacon in the Baptist church in Panama and Va. He was also the Author of the book, "21 Years Around the World with the Corps.of Engineers".

He shall be greatly missed by many.