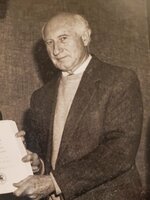 Julius "Jules" John Stofega, of Lanham, MD passed away on Monday, July 4th, 2022. He was 91 years old. Julius was born on April 12, 1931, in Creighton, Pennsylvania, he was the only child of John and Rose Stofega. He played baseball and football at East Deer High School, graduating in 1949. He was an accomplished student of the piano and organ, interests he pursued throughout his life. He also taught himself the game of tennis, becoming a competitive club and tournament player at the New Carrollton Men’s Tennis Club. He shared his enthusiasm for the game with his family and served as a coach for the New Carrollton National Junior Tennis League. After receiving his bachelor's degree in civil engineering in 1956 from the University of Pittsburgh, he began his engineering career at the Glen L. Martin Company, followed by employment with the Army Corp of Engineers and finally, as an engineer at the Veterans Administration. He was a lifetime member of the National Society of Professional Engineers. Julius is survived by his wife Helen, sons William and Gregory and daughter Mary and grandchildren Robert, Thomas, William and Margaret. A celebration of life is to be scheduled at a later date. In lieu of flowers, please donate to the Alzheimer’s Foundation of America.