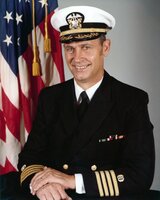 Captain Owen L. Cedarburg JAGC, USN Chief Judge of two Military Appellate Courts Owen L. Cedarburg (92), former Chief Judge, US Navy and Marine Corps Court of Military Review, who subsequent to his retirement from the Navy in 1983, then served in a civilian capacity as Chief Judge, US Coast Guard Court of Military Review, passed away peacefully on October 4, in Fredericksburg, VA. The Courts of Military Review are the highest military courts in the military justice system, subject to appeal only to the civilian Court of Appeals for the Armed Forces and Supreme Court of the United States. Captain Cedarburg was a native of St. Louis, Missouri. He was a 1953 graduate of the University of South Carolina Law School, having received his undergraduate education at Washington University of St Louis and the University of South Carolina. He was a member of the Bar of Missouri since June 1953 and Virginia since January 1985. Following his service on the Courts of Review, he was in private practice in Alexandria, Virginia until entering a retired status in 2008. Captain Cedarburg was commissioned as a line officer through the NROTC Program in June 1953 and served in that capacity for five years. He had a variety of shipboard assignments including Boat Group Commander of Amphibious Squadron 21, while assigned to the USS Chilton, an Attack Transport, and Aide and Flag Lieutenant to Commander Amphibious Group Two. He also served on the Battleship USS Missouri and Destroyer USS Brownson. After appointment as a legal specialist in the Navy in 1958, he had extensive trial experience as prosecutor and defense counsel in Norfolk, Virginia. Thereafter, he taught criminal law and appellate practice at the US ARMY’S JAG SCHOOL in Charlottesville, Virginia. He then served as Station Legal Officer at Subic Bay, Philippines. Upon return to the United States, he became the Legal and Legislative Assistant to the Chief of Naval Operations. He has held the dual assignment as Director of the Navy Law Center and Staff Judge Advocate to the Commandant Ninth Naval District, where he was promoted to Captain in 1971. He was designated Officer in Charge, US Sending State, Canberra, Australia, where he administered the Status of Forces Agreement with Australia. Captain Cedarburg is a graduate of the US Naval War College. He has been awarded the Legion of Merit and Meritorious Unit Citation for service on the Navy Court. He has also received both the Army and Navy Commendation Medals. Owen was known for his compassionate giving heart; he was always available to offer counsel whether it was advice on a sensitive legal issue, help with a crossword puzzle or just to lend an empathetic ear. His love for his family and country was continuous and exemplary. He was a voracious reader and noted for his in-depth knowledge on numerous topics. He could recite Shakespeare, quote the Uniform Code of Military Justice or demonstrate the batting stance of Stan Musial. His love for grilling provided a great venue to share stories of Navy service and Cardinal baseball. But it was always his smile and outstretched arms that signified a loving embrace that all will remember the most. Survivors include his wife of 63 years, the former Denyse Brown of Elmhurst, Illinois, three daughters, Leslie (Captain Timothy McGuire USCG, ret), Tracey Allen, Cynthia (David Rundgren) and four grandchildren, Dylan Rundgren, Christian Allen, and Owen and Molly McGuire. The family would like to acknowledge and offer thanks to his many caregivers, but a special thank you to his “Daily Angels” Mary and Lizzie Franco, for their unceasing, compassionate and loving care. Friends and family are invited to a prayer service followed by a celebration of his life, at Chancellor’s Village on 5 Nov from 11:00 - 1:00; a funeral Mass with full military honors and interment will be at Arlington National Cemetery, VA at a date TBD. In lieu of flowers donations in his name may be made to: Tunnels to Towers at T2T.org