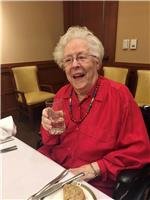 Shirley (Jones) Norwood died peacefully on March 29 at the age of 91. She was an active member of the Fox Hill Senior Living Community in Bethesda and was among the first residents.

She grew up in the small town of Marceline, Missouri and received her master's degree in education from the University of Missouri, where she met her husband, Frank. She was a teacher in Missouri and California before moving to Bethesda, where she lived for more than 50 years. Shirley was active locally and served as PTA president before cofounding Tailored Tours, which hosted receptions and other special events for conferences in the Washington area, and later joined the staff of an ophthalmology practice as a low vision specialist to provide counseling on assistive devices.

She enjoyed acting and performed with the Heyday Players in the Round House Theater in Bethesda and was an active member of the Fox Hill community. Her greatest joy was her family, and she is survived by her daughter, Betsy Shomaker and son-in-law John of McLean, VA, her son John "Nick" Norwood and daughter-in-law Anne of Sleepy Hollow, NY, 5 grandchildren, Grace, Ava, and Nate Shomaker and Philip and Sophia Norwood, and her brother Richard Jones and sister-in-law Erma Jean.

Shirley will always be lovingly remembered for her sense of humor, warmth, empathy, passion, and resilience. A memorial service will be scheduled at a future date

To send flowers to the family or plant a tree in memory of Shirley (Jones) Norwood, please visit Tribute Store