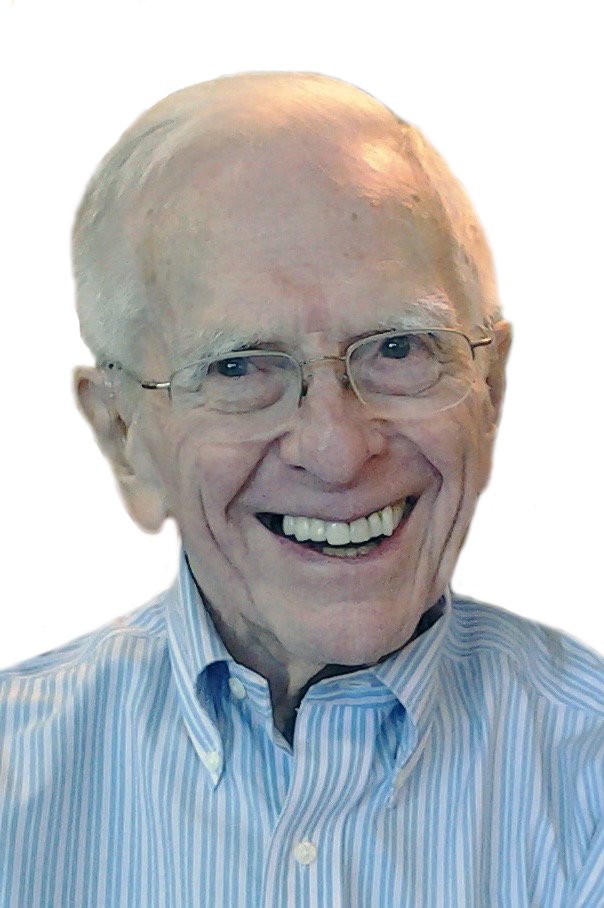 David was born July 30, 1927 in Moscow, Idaho to Blanche and Lauren Johnson of Orofino, where Lauren was co-owner and publisher of the Clearwater Tribune. With David’s arrival imminent, Blanche took herself by train several hours to Moscow to give birth to David in a hospital. David and his older sister Marion grew up in Orofino alongside cherished cousins, aunts, and uncles.

David met the love of his life, Anne, while they were both teaching in the Sisters, Oregon public school, two among the district’s four teachers at the time. They were married in June, 1956 at Trinity Episcopal Church in Bend, Oregon. They raised two children, Shelley and Phillip.
David served in the Navy at the end of World War II, attended Oregon State College, graduated from the University of Oregon, and completed a fellowship in public affairs at the Coro Foundation in San Francisco. After working briefly in the fishing and logging industries, David spent his career in education. He taught in France, Oregon, and Germany, and returned to Sisters, to become principal and superintendent. During his Sisters years, he drove school buses to sporting events all over the state of Oregon, often in snowstorms. He and Anne maintained lifelong friendships with former students

.
In 1963 David was offered the position of executive secretary of the Oregon State Scholarship Commission, and the Johnson family moved to Eugene, Oregon. From there David was invited to Washington, DC under the Lyndon Johnson administration and the Higher Education Act of 1965, to direct the new Educational Opportunity Grants program, and its companion, Talent Search.
In his new position, David was committed to and succeeded in building a multi-racial multi-ethnic staff that represented the students it would serve.  In so doing, he challenged the status quo, in which staff at the upper levels of decision-making had been almost exclusively white.  His work was passionately devoted to providing educational opportunities for low-income, disadvantaged, disabled, and first generation college students. In the words of a friend he met years after retirement, “His work in Upward Bound...and other Great Society Programs that came out of the Johnson Administration helped so, so many people. Me included.”

After 17 years with the US Office, and later Department, of Education, David joined the Academy for Educational Development.  One of his assignments was to direct the desegregation of higher education in Shreveport, LA.  He next administered, through the Academy, International Visitor Projects for the United States Information Agency, his staff growing the projects from four to around 24 a year.  He delighted in arranging US tours for international educators to visit and learn about US systems of higher education, especially community colleges. In this, as in all his work, service, and leisure, his hospitality shone brightly. He and Anne not only hosted groups of visitors in their own home, but he also arranged similar home welcomes in other regions of the United States. In one instance, a young Chinese visitor became ill, but needed to travel from Washington to Chicago. David accompanied him on the train trip just to be sure he was okay.

This was the essence of David. Hospitality, easing the suffering of others, making the world a better place for all. This essence of love for fellow human beings and all of creation manifested beyond his work life, into his deep pleasure in cooking and gardening. Many will remember him in his Williams and Sonoma apron working at the kitchen counter to lovingly prepare a meal, whether a sit-down dinner for fifty to celebrate Anne’s fiftieth birthday, a weekly gourmet dinner prepared for the men at Crossroads Shelter, a simple family meal, a block party dish, or hand-squeezed orange juice prepared for a visiting toddler. Over years of trips to the ocean with family and friends, David always filled the car’s trunk with his favorite pans and kitchen tools so the hosting and feasting could continue wherever he was.David and Anne enjoyed traveling, especially their many international trips with friends. Phillip and Shelley accompanied him on recent trips to the places of his and Anne’s roots in Idaho and Oregon. As always, his perspectives were enlightening and his constant interest in others palpable and inspiring.

David’s love of family knew no bounds, from his beautiful wife Anne, to his children and grandson, inlaws, and all his cousins and extended family in Idaho and beyond. He took great pride in his children’s talents and commitments, including Phillip’s faithful attention to his and Anne’s care in their later years. He delighted in being a grandparent and shared with his grandson Brendan a special and unique quality of kindred connection.

David was devoted to his faith community at St. Alban’s Church, where for years he organized events, handled all things logistical, was a Stephen minister, volunteer coordinator, usher, office assistant, and everything else involving spreading love and hospitality among people. He embodied love. In its generous giving, he received it.

He is deeply missed by his wife Anne Johnson, children Phillip Johnson and Shelley Chambers (Joe), grandson Brendan Chambers, David’s church family, and his beloved cousins, in-laws, and friends the world over.

A celebration of David’s life will be held at a later date when it is safe to gather together.
David’s family would especially like to thank his loving caregivers at Lisner Home, ManorCare Chevy Chase, and Suburban Hospital ICU. In these trying times, words cannot express the meaning of your calling to the work you do.  May you be safe and well.

In lieu of flowers, memorials may be given to St Alban’s Episcopal Church, Washington, DC, or to the charity of your choice