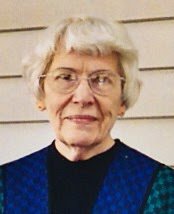 Hannah was born to Claude G. McKee and Edna Greenawalt McKee on March 6, 1923.

She grew up on a farm near Upper Marlboro, MD. After attending St. Mary’s in southern
Maryland, she went to Western Maryland College. She met her first husband in a physics lab
where he was a lab assistant (while trying to get an experiment to work). When her youngest
(Chris) was old enough to go to school, she attended graduate school at Johns Hopkins
University. She earned a Master’s Degree in Physics in 1964. She then spent several years
doing research on the structure of atoms in rare earth elements at Johns Hopkins, alongside her
husband, Milton. In 1974 she and Milton moved to Chicago to continue research at the Argonne
National Laboratory. She was one of the very few women computer programmers of her time.
She was very proud of her use of arrays in the 96K computers and knew how to lay a data track
to tape that could be read back with a minimum of tape handling.

In the mid-1980s Hannah and Milton retired to Beltsville, Maryland to be near her two sons and
her grandchildren. She became active in St. Mark’s Episcopal Church, where she led a group
of women who made needlepoint kneeler cushions for the church communion rail. After moving
to the Collington retirement community in 1991, she became active in St. Barnabas Church in
Upper Marlboro and served several years with the Collington Residents Association.

Years after Milton passed in 1993 she met and married Jim MacMartin at Collington. Their
marriage was extremely happy but brief. She remained in the Collington community until her
passing.

To send flowers to the family or plant a tree in memory of Hannah MacMartin, please visit Tribute Store
Print
Share A Memory
Send Flowers