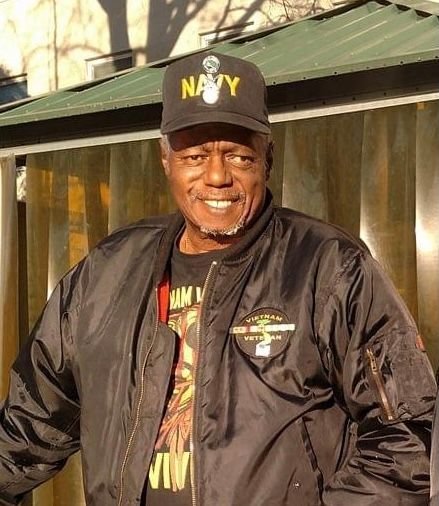 Phillip Lawrence Douglas III was affectionately known as “Spider.”  He introduced himself to everyone that way.

Everyone on the AFRH grounds knew him as Spider Douglas. He wore a spider around his neck and many pieces of his clothing had “Spider” engraved on them.

Spider was a Navy veteran, of which he was immensely proud. He served his country from October 1966 to September 1971 as a US Navy Gunner Mate, Specialist Four. Spider was decorated with the National Defense Service Medal, The Vietnam Service Medal, and the Republic of Vietnam Campaign Medal.

After his honorable discharged from the Navy, he joined the Metropolitan Police Department in Washington, DC from 1971 to 1976. He worked in security for Zayer Department store. Later he became the Supervisor of Security at L’Enfant Plaza and Assistant Director of Security for the Washington Hilton.

Spider had an enterprising spirit and started his own transportation company called DTS which he operated out of Atlantic City, New Jersey.

To add to his accolades, he was a member of the Prince Hall Master Masons in Washington, DC.

Everyone that knew Spider loved him, but he also lived a very private life.

He leaves to cherish the memories of his life to his remarkably close friend Bobby Thomas (Rosie) and a host of friends from Atlantic City, NJ to Washington, DC, including the wonderful staff from the Armed Forces Retirement Home.

Memorable words of Phillip Lawrence “Spider” Douglas, “I’m too blessed to be stressed.”

To send flowers to the family or plant a tree in memory of Phillip Douglas, please visit Tribute Store
Print
Share A Memory
Send Flowers