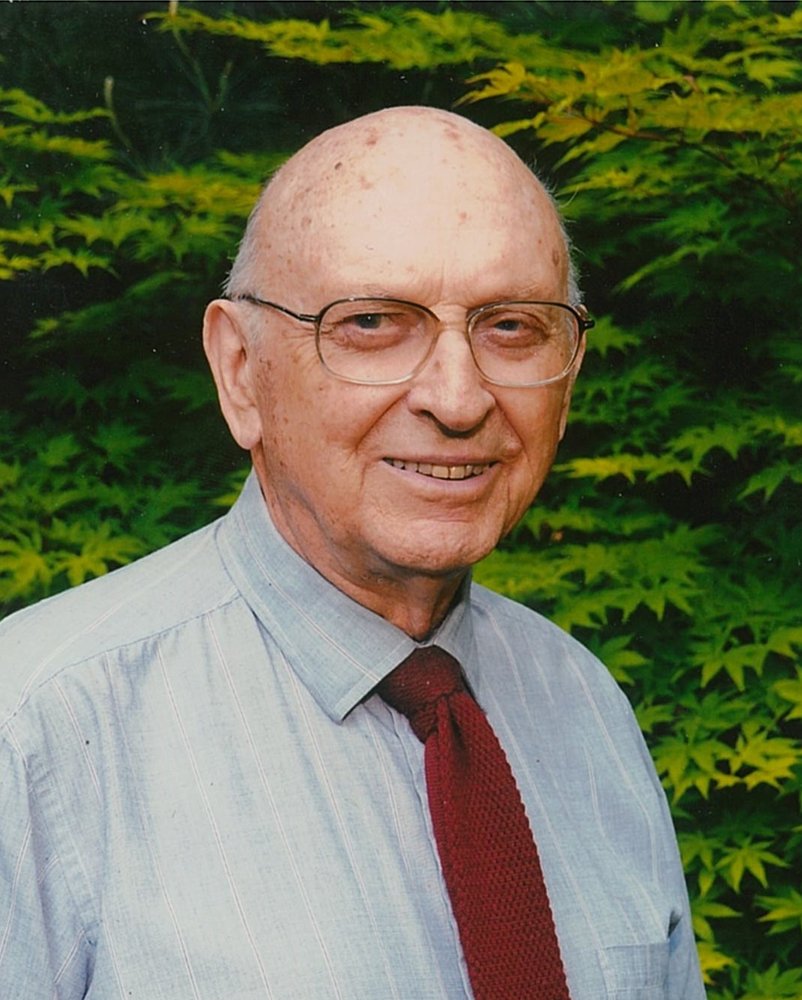 Joseph A. Rock passed away on February 7, 2021 at the age of 98 from complications due to aging and cardiovascular disease. He was born on a homestead near Inverness, Montana. Joe was the youngest of five children of Michael William Rocks and Sophia Eugenia (Kubis) Rock. He was raised by his mother. Sophia and her children dropped the ‘s’ in Rocks and thus began our Rock family history.

Joe grew up in Everett, Snohomish, and Wilbur, Washington. He worked as a laundry delivery boy, movie theater sweeper, lifeguard, and a home health aide in order to assist the family. He served as an altar boy in the local Catholic Church. He enjoyed music, playing the clarinet and harmonica, as well as athletics, particularly tennis and swimming. He was an Eagle Scout and the valedictorian of his Wilbur High School Class of 1940.

Joe and his brother, Herman, attended Washington State College (now Washington State University). From there, he enlisted in the U.S. Army and became an armed medic. He served in the South Pacific, including the Philippines campaign, and then with the post-war occupation forces of Korea. Upon return to the U.S.A., Joe attended the University of Kansas and earned a B.S. in Physical Therapy. While working as a physical therapist in Washington, D.C., Joe met and married Barbara Ann Tatem, who was an occupational therapy student.

Joe and Barbara made their home in Maryland. Four children (nicknamed their “Pebbles”) kept them busy. Joe and Barbara founded Rock Physical Therapy and Associates and were pioneers in launching a private physical therapy practice. Later, Joe expanded the practice with offices in Maryland, including Leisure World, Friends House, and nursing homes. Later in his career, he offered aquatic therapy to his patients. He was honored by the Maryland American Physical Therapy Association in 1991 as the recipient of the Kendall Award for outstanding contributions to the physical therapy profession.

Joe and Barbara employed and encouraged many physical therapy students to pursue the profession. Joe and Barbara are remembered for their professional integrity, rehabilitation skills, and work-hard/can-do attitude. They were a ROCK to many…and Joe was just that for Barbara, caring with tenderness during her journey through Parkinson’s Disease.

Joe was physically active. He enjoyed gardening and yardwork. His blackberry patch brought about social opportunities -- each person who picked was very special to him. He tried to maintain mobility even up to a month before his death, remembering all too well his youthful interests of driving a new car, golf, ping-pong, punching bag workouts, home painting, and improvement projects. As his health declined, he wrote his life memoirs, and discovered audio books through Maryland’s Library for the Blind and Print Disabled.

Over the years, Joe enjoyed his neighborhood, church community of friends, and many relationships through physical therapy. The family is deeply thankful for Cheryl, Sue and Roger, Kyrill and Liz, Thom, Steve and Jane, Pilgrim Church’s Reverend Mike, Jim and Nancy, Rick, and many more for their friendship over the years. We are also thankful for VA Home Based Primary Care and the many home health aides who allowed Joe to remain at home the last two years and Montgomery Hospice and the Casey House where he peacefully passed away. We thank you with overflowing hearts.

A virtual memorial was held at Pilgrim Church on April 17, 2021. Close family and friends will gather in the future for military funeral honors and inurnment at Arlington Cemetery.

In lieu of flowers or cards, anyone wishing to remember Joe is encouraged to donate to:

CAUTION: This email originated from outside of the organization. Do not click links or open attachments unless you recognize the sender and know the content is safe.

To send flowers to the family or plant a tree in memory of Joseph Rock, please visit Tribute Store