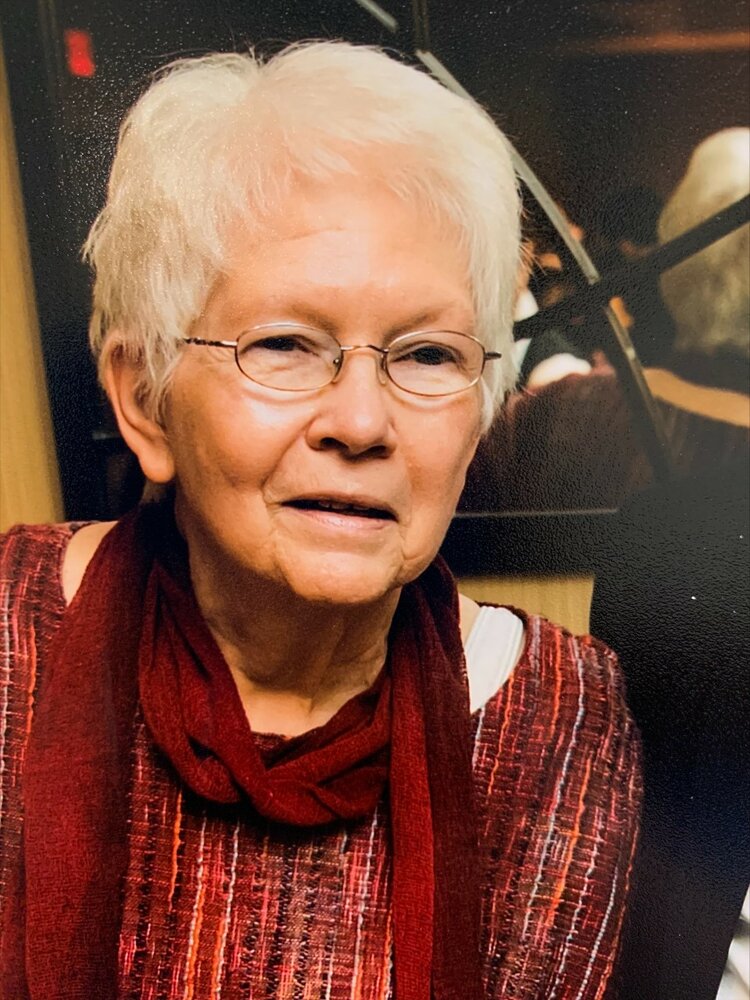 Alice Weicher – caring wife and mother, warm friend, skilled economist and gifted tutor – passed away at Sibley Hospital on Saturday, July 16, 2022, with her husband of 49 years, John, and daughter, Jean, with her. They were joined by her son, John, of Raleigh, North Carolina.  She was 81 years old and had health problems for several months.  She will be remembered for her loving relationships with all of her family, her deep friendships over many years (including 50 years in Washington), her active membership in Chevy Chase Presbyterian Church, her easy laugh, her welcoming presence and her thoughtful mind.  She loved vanilla ice cream with hot fudge, lively conversation, junky books and her grandchildren, Tate and Lucy.

Alice was born in Cincinnati, Ohio, to Harry Landt and Evelyn Landt, and she was welcomed by older sister Stephany Landt.  Her parents divorced as World War II ended, and she grew up with her mother, older sister, and maternal grandmother in the Ravenswood neighborhood of Chicago, within walking distance of Wrigley Field.  On summer vacations and Christmas holidays, she and Stephany would travel to Cincinnati to see her father, her stepmother, Dorothy, and eventually her new half-sister, Kyle.  She remembered late dinners with her father and listening to Cincinnati Reds’ games.

She graduated from Chicago’s Lake View High School in January of 1958, a semester early, and she worked in the city until beginning at Purdue University that fall.  While at Purdue, she was one of three women to earn a mathematics degree (B.S. in engineering math) in her class, of 1962.  After college, she earned a master’s degree in economics from Vanderbilt University and worked at the Federal Reserve Bank of Chicago.  Looking for more professional opportunities, she enrolled in economics PhD program at Ohio State University in the fall of 1967.  There, she met John C. Weicher, who was the officemate of her advisor, Ben Laden.  Ben and his wife, Sue, became lifelong friends, and John became her husband of 49 years – next month would have been 50.

John and Alice had a loving and respectful marriage, spanning time in Columbus, Ohio, and then many years in Washington.  They welcomed their son, John (V.) into the world and then Jean, their daughter, a few years later.  Alice balanced staying home at times to raise John and Jean more closely, with a professional career that included stints at the Council on Wage and Price Stability, the consulting firm of Cornell, Pelkovitz and Brenner, and the Federal Deposit Insurance Corporation.  At the same time, she kept track of one wild kid and one quiet one, carting them to occupational therapy and hearing therapy, helping with everything from math homework to football playbooks, providing care and stability to both children.

As her children matured, Alice found her life’s work.  Public schools in the Washington area needed tutors to help their students meet higher standards.  Her background in math was particularly valuable, as math tutors were harder to come by.  Over almost twenty years, she tutored numbers of middle schoolers and high schoolers, mostly through the now-defunct Kingsbury School on 15th Street.  Her first student had poor eyesight and used a wheelchair, and that led Alice to focus heavily on youth who had physical or mental challenges along with mathematical ones.  She was gifted at this work.  She would say, “Everyone’s got something,” meaning that each of us has challenges in life and we all need support from others.

Later on, she would become the primary caretaker for her older sister, Stephany.  She advised her husband in innumerable conversations about economics and other professional matters.  She delighted in buying presents for Tate and Lucy.  She loved the time that Jean was able to spend with her.  She always wanted her son John to scratch her back.

Alice is preceded in death by her parents, Harry Landt and Evelyn Schultz, and her sister, Stephany Landt.  Surviving her are her husband, John C. Weicher, her daughter, Jean Weicher, her son and daughter-in-law, John V. Weicher and Laurie Taylor Weicher, her grandchildren, Tate and Lucy Weicher, and her half-sister, Kyle Landt.

To send flowers to the family or plant a tree in memory of Alice Weicher, please visit Tribute Store

Share Your Memory of
Alice
Upload Your Memory View All Memories
Be the first to upload a memory!
Share A Memory
Send Flowers
Plant a Tree