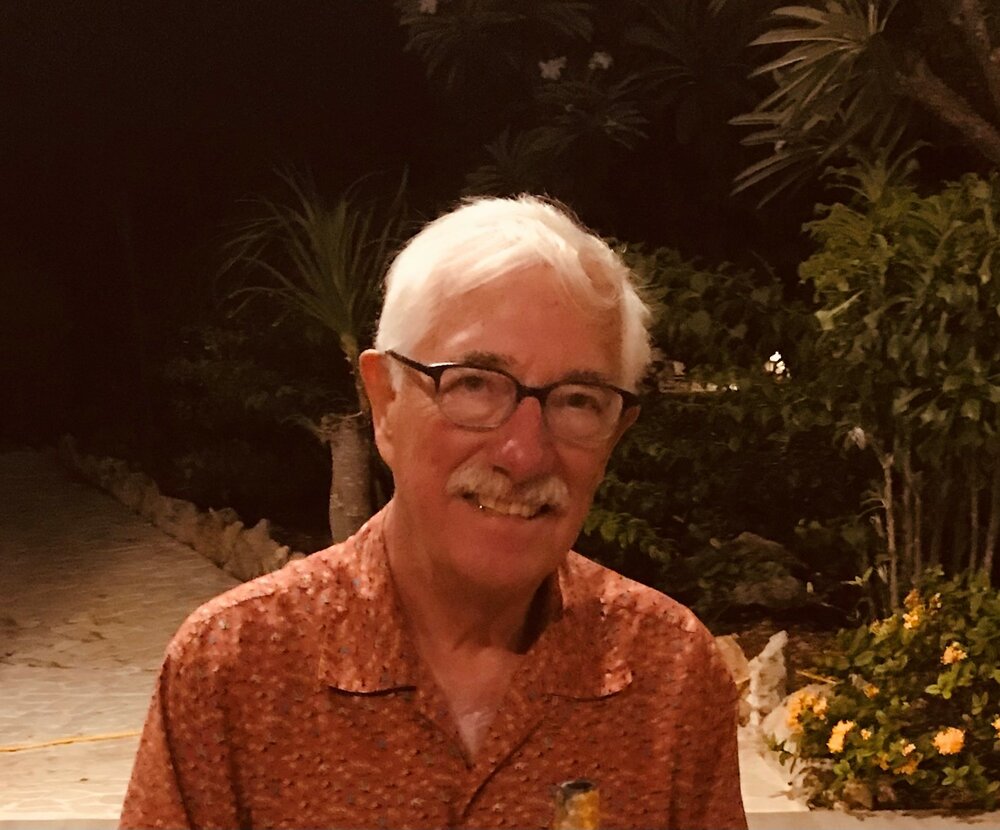 After a brief but intense battle with pancreatic cancer, John passed away in the early morning of November 19, 2022. His loving wife of 42 years, Ivy Ellen Broder, was at his bedside when he died.

John was raised in Lexington, MA in an historic home on Massachusetts Avenue. The idyllic times he experienced as a child at the Alden family home in Cataumet, Cape Cod, affectionately known as “The Big House”, continued throughout his life until the year before he died. He had a warm spot in his heart for the low country of South Carolina, being so proud of his Morrall roots. John graduated from Lexington HS in 1961. He was magna cum laude graduate of Tufts University, with honors in economics, where he ran track and cross country, and was a member of Zeta Psi fraternity. He received his PhD in Economics from the University of North Carolina, Chapel Hill.

John’s career began as an academic at the University of Florida, where he served as Assistant Professor of Economics in the College of Business. When the Brookings Institution offered him an Economic Policy Fellowship in 1972, he worked in the Office of the Assistant Secretary for Policy Evaluation, and Research in the Department of Labor. He never left Washington, DC after that and he remained in government service until his retirement in 2008. He worked under six presidents in the Executive Office of the President, both in the Council of Wage and Price Stability and the Office of Management and Budget (OMB). He was passionate about his work, believing strongly in the mission of making government regulation more efficient and cost effective. As Branch Chief for the Office of Information and Regulatory Affairs (OIRA) and Acting Deputy Administrator of OIRA at OMB, he was able to improve the lives of millions of people who never knew his name. For his outstanding work, he was honored with the SES Presidential Rank Award for Meritorious Service, in 2004.

John was the author of three books and dozens of articles in the areas of international economics, benefit-cost analysis, labor economics, risk regulation and regulatory policy and reform. Three of his articles have been reproduced in “Classics in Risk Management”. He was the first lead author for OMB’s annual Report to Congress on the Costs and Benefits of Federal Regulations. He consulted with officials of various foreign governments in over 20 foreign capitals on the US experience with regulatory reform, Regulatory Impact Analysis, and benefit-cost analysis. After retiring from the government, he continued his professional activities through consulting projects and scholarly research.

John was a sports enthusiast, especially for his various “home” teams: The Boston Red Sox, The UNC Tarheels, and The Washington Redskins. In later life he rooted for the teams of his children and grandchildren’s high schools and colleges with equal enthusiasm. He was an avid traveler, having visited more than 50 countries and he took great pleasure in sampling martinis in all of them.

John’s very special, happy place, especially since his retirement, was Villa Ivy on the beautiful island of Anguilla in the British West Indies. He could spend hours on the verandah, gazing at the ocean, enveloped by the gentle Caribbean breeze. He developed deep friendships with locals and expats in his 36 years of vacation and winter residency, and was lucky enough be there, Covid-free, from December 2019 until May 2021.

A memorial service will be held on December 17, 2022, at 1:30pm in the Kay Spiritual Life Center at American University. Please RSVP at: https://www.paperlesspost.com/go/VDGXo0bijzlvPwinApjn0

In lieu of flowers, please consider a donation in his memory to the Anguilla Animal Rescue Foundation, https://www.aarf.ai/howtohelp.shtml

To send flowers to the family or plant a tree in memory of John Morrall III, please visit Tribute Store
Saturday
17
December

Share Your Memory of
John
Upload Your Memory View All Memories
Be the first to upload a memory!
Share A Memory
Send Flowers
Plant a Tree