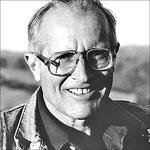 MOLLER Robert Edward Moller Robert Edward Moller passed away on March 25, 2020, at the age of 93, from complications due to kidney failure. He was born in Clifton, NJ on August 27, 1926, and was the youngest of six siblings. He is survived by his brother, Dick, and more than a dozen nephews and nieces and their progeny.

Bob was a mensch. He was a passionate world traveler and visited at least 70 countries, many of which he visited more than once, and every state in the U.S. Bob was generous and was there for his extended family and friends from all around the world. Bob was an enthusiastic collector of great art, particularly Japanese art, which filled every inch of his walls in his beloved D.C. condo he moved into 46 years ago. He even dabbled in making sculpture himself. Bob was not afraid to be himself, with one exception earlier in life. He realized he was "different" as a young boy. His mother once told him not to swish his hips. Coming out as gay to a devout Catholic mother, and to a hostile world, would not be something he felt comfortable doing for most of his life.

Upon graduation from high school, Bob enlisted in the Army in December 1944. In September 1945, he was commissioned as a 1st Lieutenant to Austria, 4th Calvary Squadron, and helped a battered Europe to recover. In 1947 Bob joined his brother Dick at Lebanon Valley College in Pennsylvania where he earned a BA in Political Science in 1951. While working, he also earned a Master's in Public Administration at George Washington University graduating in 1956. Bob worked at the Department of Defense from 1949-1961, then transferred to the Department of Labor where he worked until retiring in1982. Bob bragged that he happily lived on government retirement income for more years than he worked. He deserved it. For most of the years he worked for the federal government, Bob worked under the real threat that he could be fired for being gay. Bob also did not want to upset his mother and waited until she died at the age of 96 in 1984 to "come out." Not being able to be honest about being gay for so many years of his life was the tragedy of an otherwise adventurous, intrepid, and amazing life.

To send flowers to the family or plant a tree in memory of Robert Moller, please visit Tribute Store