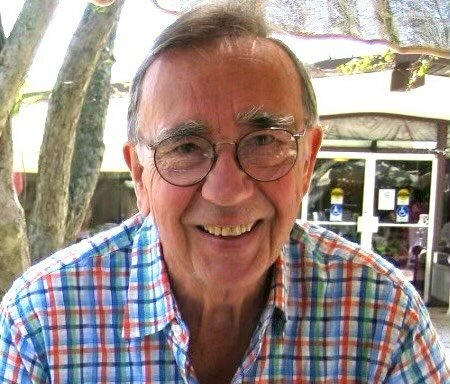 John (Jack) Edmondson of Rockville, MD, formerly of Washington, D.C., passed away on January 3, 2022, at 93. Loving brother of Jane Wasson (Ed) and Bryan (deceased, Susan), father of Anna (Peter), Bebe (Jose), and Paul (Maria); devoted grandfather of Tucker, Chloe, Josephine, Julien, and Sean; beloved uncle, cousin, and friend to countless others. Jack was also blessed to have a devoted companion and helper, Rachel Abebaw. He received exceptional, loving care from the Maple Ridge Group Home staff for the five years preceding his death.

Born on October 14, 1928, to Ralph and Katherine Edmondson, Jack grew up in Elizabeth, New Jersey, graduated from the Pingry School, Union College, and earned a law degree from the University of Virginia. He was preceded in death by his late wife, Krystyna Edmondson, on November 23, 2005. His early career began with Cooperative for Assistance and Emergency Relief Everywhere (CARE International) in Germany and Poland as part of the post-WWII Marshall Plan, where he met his future wife. The couple married in a civil ceremony and left Poland in 1960 for Chile and Ecuador.

They settled in Washington, D.C., where Jack began a long career in international development as a low-income housing specialist at the Cooperative Housing Foundation (now Global Communities). He was a leader in his field and a steadfast ally in the fight for equality and social justice. The global, compassionate perspective of his uncle, documentary filmmaker Julien Bryan, had an indelible effect on him. Influenced by European socialist models of affordable housing, Jack traveled to such countries as Haiti, Botswana, Lesotho, Ghana, Ethiopia, Egypt, and India, facilitating the development of thousands of housing units for the very poor. Jack and Krystyna then moved to East Jerusalem for three years, where he worked for the Cooperative Development Project in support of Palestinian farming cooperatives.

Upon his return to Washington, D.C., Jack worked for the Unitarian Universalist Affordable Housing Corporation, focusing on the housing needs of D.C.'s low-income population. He was an active member of the Washington Interfaith Alliance for Middle East Peace. Jack was a member of the River Road Unitarian Universalist Congregation for decades. He was an avid traveler, played tennis and chess, loved fishing, cooking, gardening, reading, learning people's stories, and offering meals to visitors from all walks of life. He was committed to self-improvement, including Re-Evaluation Counseling, and participated in countless political marches and campaigns. Jack leaves behind a legacy of love, activism, and life-long learning.

Remembrances may be shared at https://rappfuneral.com. A memorial service will be held in 2022, at a date to be determined. In lieu of flowers, donations can be made to the charitable organization of choice.